Goals for the Rest of Shadowlands

I'm typically much better organized when it comes to having particular goals to achieve pushing towards the end of an expansion, or in many cases, already being planned for going into the next expansion.  Having just returned to the game after a pretty long break, I am not quite at my normal levels of preparation and planning.

I was going back through some old blog posts and realized that my "Returning to Warcraft" blog post from last month was pretty close to being on the 13th anniversary of starting this blog.  That's a fairly long period of time to do anything like this.  With Blaugust coming up, I plan to write about my blogging history in the early weeks of that.

In World of Warcraft, I've pretty much been keeping to the same routine, working on Zereth Mortis and Korthia dailies and doing the calling and Maw invasion thing if they are factions where I still need reputation.  I've also been running wings 2 and 3 of LFR each week, trying to get more tier set gear.

The leveling on the demon hunter is progressing well.  He's still working his way through Bastion and is around level 53.  I haven't had too much play time during the last week because of various real-life issues including work and out-of-town swim meets, so that has limited progress fairly significantly.

I did jump back into FFXIV briefly and finish up the Stormblood portion of the Hildibrand quest line.  If you enjoy funny stupid stuff, I still say that is one of the greatest things that has ever been done in a video game.  It always makes me laugh and smile. 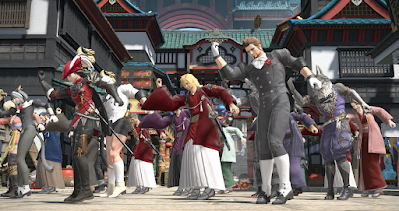 There's a group line dance number at the end of the quest chain.  What more needs to be said?
Cheers,
Joar

Finished the Bastion Covenant Campaign, and Druid to 60

I finished up the Bastion covenant campaign on my death knight yesterday, marking the last of the covenant campaigns that I had not yet completed.  I honestly thought there'd be something more compelling than just an achievement as a reward for that., given how Shadowlands seems to hand out mounts and pets like they're candy.

I also bought the remaining mounts that I didn't have for Night Fae on my warlock.  I need to go back to the other quartermasters and see if there are other mounts that I can buy as well.  I'm guessing there are.

The Bastion campaign was a good story.  I have a hunch that it was probably pretty similar to the Maldraxxus campaign, but since I did that one at least 15 months ago and have no memory of it, I found the whole thing pretty entertaining. 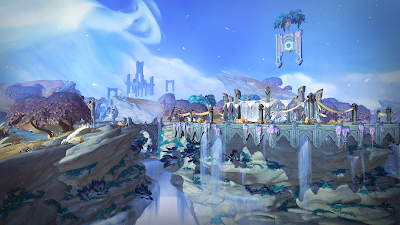 On the druid, I once again finished all four covenant zone Threads of Fate without having hit level 60, so this time I picked the Torghast Thread of Fate and did a relatively quick Torghast run.  That did manage to get me the rest of the way to level 60.  Time-wise, I'm not sure it was any faster than a couple of random dungeons or running around knocking out a few world quests, but it was generally fine.

Contrary to my previous statements, I've now picked up the next alt on the list, my Demon Hunter, and have started leveling him as well, to take advantage of the xp buff that was just released.  I didn't apparently advance him at all after BofA, so I was able to elect the storyline option for him.  We'll see how that works out versus the Threads of Fate approach.  Based on the 10-hour leveling time with my druid, with a 50% xp buff in place, it should take 6 hours and 40 minutes with the next toon, so the evaluation will be whether the storyline is faster or slower than that.

I've also continued to run the relevant two wings of Sepulcher each week on Joar in an attempt to get my four-piece set bonus, but I've been completely unsuccessful at that so far.  Beyond that, I'm just doing dailies and callings to get the last four reputations to exalted that aren't already complete - Maldraxxus, Revendreth, Korthia, and Zereth Mortis.  The first two are relatively close.  Death's Advance is about halfway into Revered and the Enlightened are about to ding Revered, so I'm pretty close in general.

That is about it for this week's update.

Now that I have finished leveling my death knight, and am about 3/4 of the way to being done with my druid, I have some updated thoughts about the current state of the Shadowlands leveling process, especially concerning alts.  My initial feeling as I picked up the death knight after a 15-month break is that not much had improved from where I had left off.

Having now spent more time with it, both on the death knight and the druid, it does now feel a lot more smooth to me than I was initially thinking.  The time it takes to fill the bar for each area that you pick for Threads of Fate seems to move fairly quickly, particularly if you're also picking up the world quests in that zone and also running the dungeon quest from that zone once while you're there.  As has always been the case with WoW, sometimes the groups that you get are a complete dumpster fire, but probably sixty percent of them have been fine so far.

My only issue is that on both the death knight and the druid, I finished all four primary zone threads of fates and still had not hit max level.  In general, it was then just a matter of knocking out a world quest or two or running a random dungeon or two, and that seemed to do it, but it does feel like that is something that could be tweaked a little bit.  I have not tried doing either the Torghast or Battleground Threads of Fate, although I probably should. 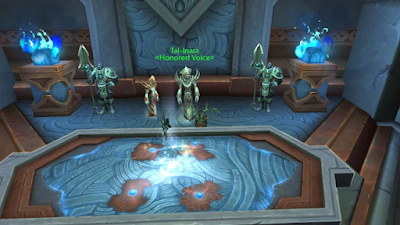 I did use the Darkmoon Faire to max out the warlock's cooking skill, so now it's just fishing that he needs to finish up to have all of his professions maxed.  I haven't really done anything on any of my other main toons on professions and probably won't.

I'm still making good progress on Joar on reputations.  I'm getting pretty close to Revered with the two new factions and am fairly close to Exalted on everyone else.  Once I get there, I'll need to decide how many fancy new mounts I want to buy.

That's pretty much it for this week's update.

I was able to get my death knight to level 60 last week and have started working on the druid.  I've always enjoyed playing a frost death knight but was disappointed that it seemed too squishy to level that way reasonably.  I tried a few times over the course from 50 to 60 but ended up switching back to Blood fairly quickly both times.  Death strike was just not keeping up with the amount of damage that I was taking.

I am now working the death knight through the Kyrian covenant campaign, which as I have gone back and checked, is the only one that I didn't finish before giving up the game.  The druid I am leveling as balance.  I was hoping to go back to just straight story campaign leveling with the druid, but apparently, I had already made that selection before I quit playing, and there is no way to change it back.

In addition to all of that, I've been doing all the dailies on my Warlock, working on getting the reputations for everyone up to exalted, finishing up the Korthia Chains of Domination campaign storyline, and have also run all of Sepulcher at least once in LFR.  I now have two pieces of tier gear, and will keep running the wings that drop tier until I'm able to get my four-piece bonus, and maybe a weapon upgrade.

I am likely not going to do anything to advance the various Shadowlands professions.  My two professions on my warlock, Tailoring and Enchanting, are both maxed, but I don't really see the need to do that on the other four alts that I'll have sitting at max level.

It's enough to keep me fairly busy these days.  The only other game that I've still been dabbling in a bit is FFXIV, where I've continued to run ventures on my retainers and slowly working on leveling my Astrologian and Red Mage.