A Critical Evaluation of the Warlord Cinematic

So here are a few initial thoughts on the Warlords of Draenor Cinematic.

Thank you to Alternative Godmother for a fantastic idea.  For those of you not following her blog, you should be.  It sits at www.alternative-blog.net, and it's fantastic.  You can also find her on twitter @AlternativeChat, which is also the name of her podcast which you can find on iTunes as well as on the blog.  Of course, the chances that you're reading me, and not reading her are pretty slim, but just in case, I figured I'd add that plug.

In any case, she had the absolutely brilliant idea to get the community to a bit of a retrospective on the last 10 years, so she's asked folks to answer 10 questions about their experience with World of Warcraft.  So with no further ado, here are my answers to the 10 questions:

1. Why did you start playing Warcraft?

So, for those of you that have watched my Twitter feed recently, I have been divorced and remarried.  I had one child with my previous wife, and we divorced when he was two years old.  When he was three, my ex-wife decided to move about 450 miles away from me.  I've spent the last 15 years traveling to see him every other weekend.  That's all about to end, because next weekend, he's going to be starting college full time.  He'll be studying Chemical Engineering at the University of South Carolina.

Video games became a connection point for us.  It start with Sega Dreamcast and Nintendo, and eventually XBox.  We'd spend a significant amount of our time together on the weekends just playing games together.  At one point, there was a lull in between releases of various console games and we went looking for something else to keep us occupied.  Trolling the video game aisle at Target, we came upon World of Warcraft.  "You ever heard of this?"  "Yeah, I think some of my friends play it and think it's pretty cool.  It's online, so we could play together even when you're not down here."

DING DING DING DING!  We have a winner!  So we picked it up and started playing.  It gave us a way to stay connected during the week and on the weekends when I wasn't here.  And 8 or so years later, it's something that we still do very regularly.
2. What was the first ever character you rolled?

Meet Abbert.  Gnome mage.  The first character I ever rolled, and never got past level 13.  He still sits calmly there in Stormwind, waiting.  Hoping I'll decide to finish him up one day.  I believe I started him on Drenden, but then took a free server transfer to Nesingwary at one point when I started the mission of getting a toon of every class of one faction to max level.  Of course, that started on Drenden, but then moved to Garrosh when my son (see above) moved most of his toons to Garrosh. 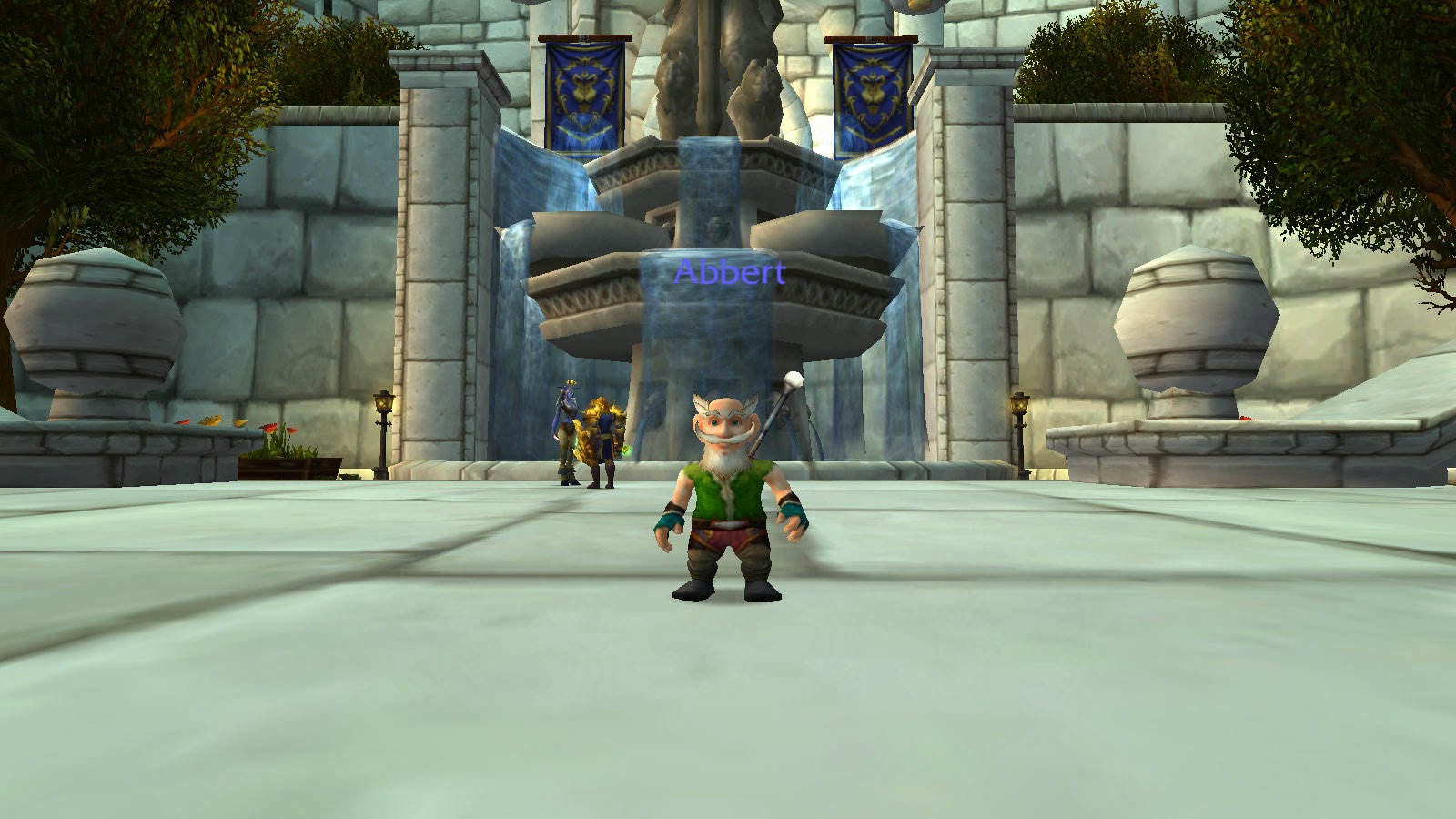 3. Which factors determined your faction choice in game?

I initially tried an alliance character and got a little frustrated with it.  Squishy mages.  The next thing I tried was my warlock, Joar.  Interestingly enough, that's what came up when I hit randomize on the name button and now it's a key part of my online identify.  Funny how that works.

There wasn't really anything specific about either faction.  My first forays on an alliance toon weren't successful.  I tried an undead warlock and that went much better for me.  I found a friendly guild right away, and the rest is history.
4. What has been your most memorable moment in Warcraft and why?

Hitting max level for the first time is still a very memorable thing for me.  Also, my first time stepping into a raid.  I love some of the fun things that my guild has done and some of the special in-game things.  Getting together in game to honor a friend's passing, for example.  The Lich King was my first end expansion boss kill, and that is still very memorable for me, as is Deathwing.

I'm really not sure I could identify just one.  My son and I co-tanked Throne of Thunder one weekend beginning to end, and that was an amazing thing for me, because I am truly the worlds worst tank, and I was really amazed how he was able to sit there and walk me through it so we ended up having a very successful run.
5. What is your favourite aspect of the game and has this always been the case?

I really enjoy leveling.  And yes, I think that's always been the case.  There are a ton of things that I enjoy though.  I like raiding on a casual basis.  I enjoy PvP every now and then.  I love exploring.  I love working on professions.
6. Do you have an area in game that you always return to?

I tend to hang out in a combination of Orgrimmar and whatever the faction base of the xpac is (Shattrath, Dalaran, Shrine, etc.).
7. How long have you /played and has that been continuous?

318 days, 16 hours.  It's sort of interesting to me how that breaks down.  I'm currently sitting at a total of 15 level 90's.  I've got 11 of those Horde - one of each class, and 4 alliance, with another 7 alliance in the process of leveling.  The played time is very heavily Horde slanted with a total of 297 days, 22 hours on that faction.  Of that, my main, Joar, undead warlock, has the most at 109 days, 7 hours.  Surprising to me, my priest was second at 26 days, 23 hours.  I probably raided most on my priest in Cataclysm and did a fair amount of PvP on him early in MoP.  My druid was my lead alt through most of Wrath however, so I really expected him to be higher.

On the alliance side, my total is less than my average Horde toon at 19 days, 21 hours.  The highest is my hunter at 4 days and 12 hours.
8. Admit it: do you read quest text or not?

I do.  Not for quests that I've done 20 times.  But the first time leveling in any given expansion, I'm definitely reading them.  Usually the second time as well.
9. Are there any regrets from your time in game?

Well, now that I see his sorry ass sitting there in Stormwind all sad and at level 13, I sort of regret never finishing Abbert.  I sometimes regret leaving Drenden because as it turns out, it wouldn't have impact my ability to continue to play with my son given cross realm and all that.  While I have a guild that I love on Garrosh, I had some really good friends on Drenden and was sad to leave them behind.
10. What effect has Warcraft had on your life outside gaming?

It has mostly been a way for me to stay connected with my son.  Something for us to always talk about during those awkward teenage years, and will hopefully remain that way while he's away at college.  In the meantime, I'm working on getting his two younger brothers hooked (so they can stay connected with him as well...yeah...that's it!)

It's a Rogue Lovin' Weekend (Maybe)

So I think the plan for this weekend is going to be to give some LFR love to my rogue, who currently has the lowest ilvl of the Joar Horde empire.  I did manage to pick up a Timeless Isle weapon for him and also a Shado-Pan Assault trinket, so it did move his ilvl from 503 to 508, but that still puts him 4 points behind the next closest member of the Joar army.  So I may see if I can make some progress on him this weekend.

My last update was way back in early May.  Despite taking a break from doing much on the Horde side, there has been some movement on the Horde side since then.  So here's the latest and greatest: