Grinding in Tanaan and Leveling the Alliance Army

So I've been working on rep grind and the legendary questline on Joar and when that's all done, I've been focused on leveling the alliance army.  Making good progress there too, with one toon now on to Northrend and everyone else other than the monk making good progress in Outland.

Oh, and I've gotten far enough along in Tanaan that I got my Corrupted Dreadhawk.  It's pretty! 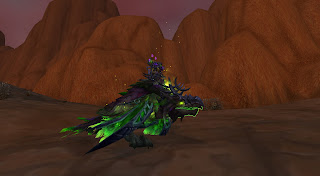 Right now Joar is sitting at 13/33 Tomes, with two bosses still to do this week.  I seem to be averaging around 1.5 tomes per wing, so if that works out, it should take me four more weeks after finishing the current week to be done with Tomes.  I also managed to FINALLY get my Submarine to Epic, which now allows me to resume my work on the Shipyard portion of the legendary chain.

Interestingly enough, my last update on leveling on the alliance side was one year ago today.  How weird is that.  Totally random that I thought about posting this today since I've been doing a lot of leveling of the alliance group lately.

In any case, here's the update on the rather sad progress that I've made in the last year:

So that's where we are.  I'm likely going to continue leveling this bunch until flying is released and I can restart the last 5 characters sitting at 90 or 91 waiting for the push to 100.

I managed to completely miss my 6 year blog anniversary, which was now over a month ago.  Shows you how much importance I assign to stuff like this.

I've managed to get quite a bit done in the last couple of weeks, though.  I finished up the Draenor Pathfinder achievement on my warlock.  So the Order of the Awakened is now officially dead to me.  Go get your own damn fel apexis crystal thingys.

I'm still doing the Apexis dailies just to try to accumulate enough for some mounts.  I also took a stroll through the new LFR wing, and got exactly 2 Tomes for both wings combined.  So much for the good drop rates that I was experiencing the first two weeks.

Also, with the announcement that this was the last raid of this expansion, I've decided there really isn't any point in finishing the legendary quest chain on more than one toon.  By the time I finish it on the one, I'll like be sick of HFC, and since it doesn't sound like it's going to unlock any special world bosses, or really be of any use at all other than as a "looky at what I've got" type thing, there doesn't feel like a lot of point.  But that will give me more time to continue to progress the alliance side of things.  Maybe have all 22 at max level by the end of this expansion.  Crazy talk

I also finished getting my rogue to level 100, and am now working diligently on getting his engineering maxed.  Engineering and Leatherworking are the last two professions that I need in order to have absolutely everything maxed.  I should be able to finish up leatherworking in the next day or so, but Engineering may take a bit more time.

In between all of that, I've also been working on leveling some more of the toons that are below 90 on the alliance side, working a bunch of folks through Outland.  The first of the Sub-90's are now officially heading for Northrend as well, so that was good news.

So it's been busy, but not particularly stressful.

So I've almost finished getting my main to revered with all the relevant Tanaan Jungle factions to unlock flying.  I've got about 3 days left, but I'm not in any rush, so it may be a week or so until I finish.  I expect we won't see the patch that officially unlocks it until the end of the month anyway, so I don't think there is any particular hurry.

Finishing up my second week of LFR, both my warlock and hunter are at 4/33 Tomes, so we've been getting some consistency.  I've decided to wait to start working on it on my death knight to benefit from any drop buffs they might introduce later on.

I also took my druid into LFR to do a bit of healing, and that went really well, even on a Monday.  So far, Iron Reaver seems to be the biggest challenge in the opening wing, and that's really just a matter of not standing in bad, running out of the raid when you're supposed to, and not getting out of range of your healers.  People will learn.

So I was thinking a bit about things that I would like to see in later mini-patches, particularly from the perspective of an altoholic, and here are a few things I came up with (some of these are incredibly obvious).

I haven't been doing much on my rogue, although that may change.  I've said I was going to hold off on leveling him the rest of the way until flying gets unlocked, but I may not end up waiting that long.  I'd love to get a level 3 engineering building to make it easier to finish that profession.

**  From The Grump Elf Blog, one of the most beautiful idea I've ever seen for this!  Quoted below.

"For Fel-Corrupted Apexis Shards do this:
Turn auto loot off if you have it enabled. Now every time you kill something, rare included, you have to manually loot, but you will also never loot a fel corrupted apexis fragment off the body of the mob again. Leave it on the body. As soon as the body despawns the fragment gets mailed to you from our friendly neighborhood postmaster. When you are done for the day go to the mailbox, pull 10 out, turn in the quest. Everything left over is a head start for tomorrow.http://thegrumpyelf.blogspot.com/2015/07/the-ultimate-unseen-influence-tip.html "
at July 08, 2015 1 comment: