My Female Role Models in Warlords of Draenor

So I don't normally get involved in the various controversies swirling around the Warcraft community.  My blog posts tend to be primarily focused on my recommendations and thoughts around leveling and handling large numbers of alts, but I've read some excellent material lately on this topic and had a point of view on this that I wanted to share.  This may get me flamed I guess, but I'm going to jump into the fray anyway.

"Daddy, weren't there any strong female leaders in the past?" 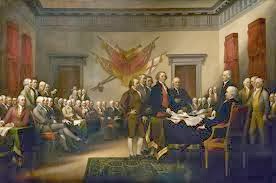 "Daddy, weren't there any strong female leaders in the past?"

Strangely enough, when I got to thinking about it, the idea of a Draenor from the distant past not containing any front and center female leaders who got to be in the painting so to speak, didn't seem all that different from our own past.  But does that mean those female leaders and role models weren't there.  Clearly not.

But does that mean that when I decide to time travel to go back to old Draenor, or to the time of the American Revolution, does that mean I'm shit out of luck if I need to find a good female role model.  Not at all, because fortunately for me, I take my role models with me.

It's too bad for the writers and developers if they've decided to not bring Aggra, Tyrande, Jaina, Garona, Sylvanas, Keristrasza or any of our other strong female NPC's along and give them a key role in the next expansion.  I'm also going to add Aysa Cloudsinger and Yalia Sagewhisper of the pandaren to the list.

But when I look around at the World of Warcraft Community and the people that I follow and that play this game every day, I see plenty of outstanding female leaders who will undoubtedly be running through the portal into Draenor with me.  Members of the community that aren't afraid to stand up and hold Blizzard accountable and generate dialogue about the decisions that are being made.  They're doing it now as Blizzard begins fleshing out it's new expansion.  A lot of time has past, but I remember a lot of the same folks speaking up and holding Blizzard's feet to the fire when Ji Firepaw was getting out of line and behaving inappropriately during the MoP beta.

So Blizzard could decide to the fill the next expansion solely with Gelatinous Blobs, and I'll still have plenty of female role models.  So Daddy, where are the strong female leaders?  Well here's a list.  Watch these people.  Listen to what they have to stay.  Engage in a dialogue with them, and I'm confident you'll be fine.

(I apologize for the people that I'm sure I left off this list.  This wasn't meant to be by any means comprehensive, just a list of folks that I quickly cobbled to together that I look up to and respect)

What I'm Hoping For From Blizzcon

Tomorrow is the official start of Blizzcon.  People are already starting to line up outside the convention center.  The Sha of Happiness and AngryOrc have already been spotted together in public.  It's quite a commotion already.

There's been a lot of traffic in the blogosphere over the last few weeks over what folks are wanting to see out of this Blizzcon, and out of the presumed announcements for the next expansion, fueled even more by the discovery that Blizzard had trademarked "Warlords of Draenor."  So I thought I'd add my two cents worth, overpriced though that may be.

One thing that I'm pretty convinced of, is that regardless of the actual geographic setting, what we are likely to get is lots of really gorgeous, interesting new content, new quests, new dungeons, new raids and likely other new shinies.  Whether it's going to be 10 levels or 5, I'm honestly not sure I care, because I'm assuming that Blizzard will be shooting for about the same amount of time to get to the next max level, regardless of the numbers in between - likely around 24 hours played.

Will there be new races, or new classes?  I'm honestly not sure I care.  Unless we further expand the character slots on each realm, I don't have room for another character in the existing Joar empire, which would lead me to having to make some hard choices.  We seem to be in the mode of introducing a new class every other expansion, which would seem to weigh towards no new class this time.  Given that, there will probably be two.

Don't get me wrong, if there are new races or classes, I'll be jumping right in, but it's not something that's going to drive me toward participating in the new expansion.

Most of what I'd like to see in the next expansion are really pretty minor game mechanic type items, so here they are:

So those are my hopes.  Pretty minor compared to some of the other things being thrown around, but I'm generally pretty OK with new and exciting stuff no matter what.  Even ended up getting into pet battles even though I swore I wouldn't.