There are quite a few updates this week, but I'm going to start with FFXIV.  I managed to get all of my DOH/ DOL (crafting and gathering jobs) through the Stormblood levels and have now moved on to the current Shadowbringers content.  This involved crafting new sets of gear for both gathering and crafting, both of which had full usable sets of level 71, which was nice!  This gear also looks quite a bit better than the later Stormblood stuff did.  Gathering gear is the top picture and crafting gear is the bottom. 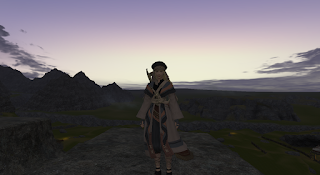 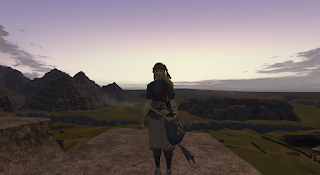 Shadowbringers also brings two new beast tribes which also provide experience for these jobs - the Dwarves, which provide daily quests providing crafting xp, and the Qitari, which provides gathering job xp.  As far as I know, this is the first time we've seen a gathering dedicated beast tribe, which is nice.
They were fairly involved quest lines to unlock both of those, but the stories for both were definitely engaging and worthwhile.
Here is where I currently stand on all of these jobs:
DOH
Carpenter - 72
Blacksmith - 73
Armorer - 73
Goldsmith -73
Leatherworker - 72
Weaver - 73
Alchemist - 72
Culinarian - 72
DOL
Miner - 73
Botanist - 73
Fisher - 72
Elder Scrolls Online
There is an in-game event this week called the Jester's Festival that gives an automatic 100% boost to experience with an item that you receive from the intro quest.  So I'm going to try to leverage that into some significant progress on my Magicka Templar.  He's currently sitting at level 30 and finishing up the Daggerfall Covenant story line, which has been really fun and engaging.  I'm really looking forward to going back and trying the other two at some point.
After finishing this one up, the plan is to do some of the intro material from Cyrodill in order to get the mount speed boost, and then keep working chronologically through the content.  The Templar looks pretty decent so far.  The armor you get always seems to be nicely coordinated. 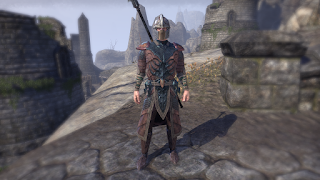 If you're looking at the blog today, you'll notice there have been some significant changes.  Both the website address and the title have changed and the long list of max level characters on each server in World of Warcraft have gone, replaced by some information on the various other games that I'm playing.

Thank you to my good friend Sarah (@InternetofWords/@MoveablePress) with help on brainstorming the new name as well as the absolutely brilliant new blog header!

What has prompted this?  For starters, for the first time in probably 14 years, I'm no longer subscribed to World of Warcraft.  I haven't played meaningfully in several months, and I'm getting enough entertainment from the other games that I'm playing that I haven't really missed it at all.

This blog post isn't going to be a bash on Warcraft.  I know a lot of people are still enjoying the current iteration of the game, and that's great.  I'm just finding that other games are working better for me right now.

The other major changes, is after getting some good feedback on Twitter, I changed the main class that I'm playing in ESO to Magicka Templar, and it definitely feels a lot better and more fluid to me!  Since I already went through the Coldharbour quest line on my Magicka Sorceror, I decided to skip that on the Templar and just work my way through the Daggerfall Covenant storyline.  That's been really good so far and I'm really enjoying that storyline.

I will likely go back and do the Coldharbour stuff at some point, but for now, I'm having a good time working my way through the DC stuff.  My new Magicka Templar, Joarvyk, is sitting at level 22.

In FFXIV, I'm continuing to work through DOH/DOL progression and am very close to having all of these jobs to level 70 and progress on to Shadowbringers stuff.  The Stormblood leveling for these jobs has been a ton easier than Heavensward was and I'm back to leveraging Grand Company turn-ins and Namazu beast tribe dailies for a lot of the progress.

Here is where I stand on each job:

The mid-Stormblood crafting gear has got quite the look going: 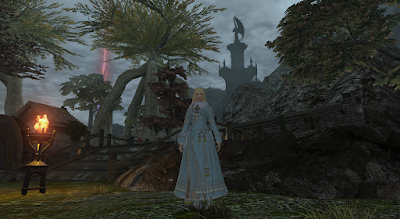 Apparently I'm prepared for both blacksmithing, waltzing and an evening with the Bridgertons, all at the same time.

The Painful Push Through Heavensward DOH/DOL Leveling in FFXIV

Boy did I hit a rock wall on leveling my DOH/DOL jobs after my last blog post.  As it turns out, the materials for Grand Company turn-ins once you get past 50 for most of the DOH/DOL items become truly prohibitive.  Lots of rare materials that may only appear at certain times with very low harvest success rates.

Gear also becomes a major issue with crafting those items for the turn-ins as there seems to be a serious jump in stats needed past 50.  And crafting the gear needed for yourself is subject to the same issues as the GC stuff that you're trying to make to turn-in in the first place.

The answer for me ended up being switching to Ishgard Restoration.  My pre-50 gear seemed to work just fine for the level 40 Ishgard Restoration items which gave plenty of xp for leveling the DOH jobs from the early 50's to 60.  Plus gathering in the Diadem naturally progressed my DOL jobs.

If I had been willing to do the rather long unlock quest line at the time, unlocking the Moogle Beast Tribe dailies likely would have helped during the process as well, but I didn't think of that until it was too late.

My plan, which seems to be working pretty well so far, was to craft a full set of early 60 crafting and gathering gear since the Stormblood stuff seems to be a bit more straightforward.

I also unlocked the Namazu Beast Tribe quests and used those to move my various DOH jobs up from 60 to 62 or so until more of the new gear could be used.  And at this point, I'm now back to being able to use the Grand Company turn-ins to get about a level per day on each of the DOH jobs.  Plus an additional level a day from the Namazu stuff.

I briefly flirted with going back and trying to get current on all the profession quests, but ended up deciding that wasn't necessarily worth while.

Here is where I currently stand with all of them:

Since I've been very focused on FFXIV lately, I haven't made much progress on ESO.  My Sorceror is sitting at level 25 and working through Coldharbour.

Death Knight is still sitting at level 54 and still hanging out in Maldraxxus.  Not much going on there.

That is the update for this week.