Leveling as a Healer in FFXIV

I am continuing to work my way through the main scenario quest on Final Fantasy XIV.  I'm almost done with the leveling content from Heavensward.  After initially starting the game as as summoner, during the post max level story for A Realm Reborn, I decided to switch to running through the MSQ as a healer because of the long queue times for DPS for some of the required larger trials and dungeons.
So far this has worked out pretty well.  There have really only been one or two dungeons where I've had problems getting through it and I'm still finding the groups in FFXIV to be very helpful and supportive, unless someone is obviously griefing the group.
I have debated switching back, because I really do prefer leveling as a DPS, but with the number of dungeons and trials required to complete the MSQ, I'm just not sure it's worth 30-60 minute waits in some cases before being able to progress.
The gear in the early stages of Heavensward has been pretty interesting.  Here is a set from early on.  Definitely has the vibe of healer and part-time court jester.

Now later on, the look has transitioned to this: 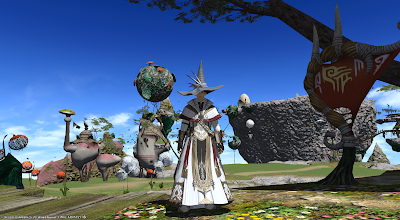 This particular look seems like I couldn't decide between priest and witch and just decided to do both.
In terms of base questing, the Scholar job does some pretty decent dps, so working through go kill X mobs quests (which aren't all that common anyway) seems to go pretty smoothly.  Maybe slightly slower than it would be as a geared summoner, but not bad enough to notice.  And with my little healer always by my side, I'm virtually indestructible, which was definitely not the case for the DPS version.
Right now I seem to be running about 6 levels ahead of the MSQ courtesy of the XP boost currently in place for characters under level 70.  I'm planning to stick with the healer spec for a while as gearing both seems like too much of a pain.
In other games, I'm not doing much in SWTOR at this point other than finishing up professions.  I'm pretty close to having every single character with all maxed professions at this point.  I'm using a bank alt to sell off materials, so I should be in a good spot if I decide to start playing again.
On the World of Warcraft side, I'm still waiting for the pre-patch and starting to think through preparing my characters for the launch of the new expansion.  I'll talk through how I handle that in a future blog post.
Cheers,
Joar
at September 23, 2020 No comments:

I actually logged on to World of Warcraft this morning to do the Darkmoon Faire profession quests.  First time in 3 months.  I actually have no idea why I did, particularly since those professions are now completely irrelevant with Shadowlands dropping in a month and a half.

I suppose I'll find myself gradually transitioning back into World of Warcraft as the launch date gets closer.

I'm continuing to work on leveling my crew skills in SWTOR.  All my gathering skills are at 700 now and all but two of the crafting skills - Armstech and Synthweaving.  Both of those are in the 600's, so not far to go.

Only one mission skill is there, with the other three in various stages of progress.  Underworld Trading is the next closest I believe.

Mostly these days I'm continuing to play through the story content in FFXIV.  I managed to finish the original A Realm Reborn (ARR) pre level 50 content.  The last dungeon of that story chain was truly epic.  I'm now working on the first of the level 50 content patches (of which there are 5).

The only minor glitch that I experienced is that because rings, necks and other jewelry pieces don't drop in the main scenario quest line, my gear level was not high enough for the next to last dungeon.  One ring purchase on the market board took care of that, but it seems like something they should fix.  I was sitting at level 55 by the time I finished everything, so still running slightly ahead, but not nearly as far ahead as I was at one point.

For now, I'm working through the 2.1 quests and still really enjoying the story line.

My game time these days has become significantly more focused on Final Fantasy XIV.  There doesn't seem to be that much more content to explore on SWTOR at this point.  I'm working on finishing maxing all the professions, but I'm almost fully complete with that at this point.

Sort of strange that I will end up maxing all the professions in SWTOR but won't end up doing so in World of Warcraft.

I'm finding the story really engaging and I'm looking forward to continuing my Arcanist's journey, at least until Shadowlands drops in late October.  I'll be very interested to see how far I get on the Final Fantasy story line before that happens.  I'd love to get current with it, but we'll see.

For those of you that aren't familiar with Final Fantasy XIV, here are some key differences from other MMO's that I've found interesting so far.

I've been enjoying the game a lot and would highly recommend it, either to folks that have tried it before, or to folks looking for something new and different right now while there may be content draughts on other games that you're playing.

The enjoyment that I've been finding in both FFXIV and SWTOR has me thinking about cutting down the number of alts that I level in Shadowlands.  Maybe down to my original core Horde characters and possibly one Alliance character, just so I continue to see things from both sides.

For now, I'll continue to find enjoyment in the games that I'm working on.