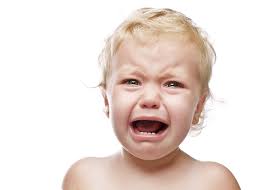 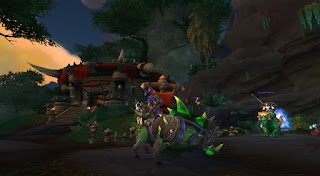 Activision-Blizzard released their Q2 earnings after market close this afternoon, followed shortly by their quarterly call with analysts and investors.  Overall for the company, it was an extremely good quarter, with both revenue and earnings beating expectations and prior year.

A couple of interesting overall points to note.  Blizzard typically provides a bullet point list of highlights for the quarter and a similar bullet point list of outlook items.  Warcraft was #6 on the highlights and #7 on the outlook.  I'm not intending to imply that's the end of the world as we know it.  It may just be an interesting indicator of where Warcraft stands in their overall corporate priorities at this particular moment in time.

It's also very possible that that says nothing about priorities and they just tend to lead with the Activision stuff because that's the order that they're used to seeing things and that's how they manage things.  I went backed and looked at their press release for Q4 2008, the quarter of the Wrath of the Lich King release.  World of Warcraft was presumably riding high then with 11.5 million subscribers.  It was still #6 on the bullet point list

They have about $4.4 billion of cash on hand and increased their dividend by 15%.  Right now, their dividend is sitting at slightly more than 50% of their free cash flow year to date.  And even with a 15% increase, the yield on the stock is still less than 1%.

They also specifically mention in the release that patch 6.2, released in late June, helped to stabilize subscriber numbers for the quarter.  It does raise the question if subscriber numbers had dropped significantly below the 5.6 million that they disclosed in May or early June.

Last overall point is that there was a significant emphasis, both for Activision and Blizzard, on overall customer engagement.  There was a new metric quietly rolled out this quarter in the release called "Monthly Active Users" or MAU's.  Comparisons to prior year was given for that new metric for Activision and Blizzard each as a whole.  It seems that they're doing a lot more to track their overall customers across a variety of platforms.

So here is the specific financial detail for Q2: 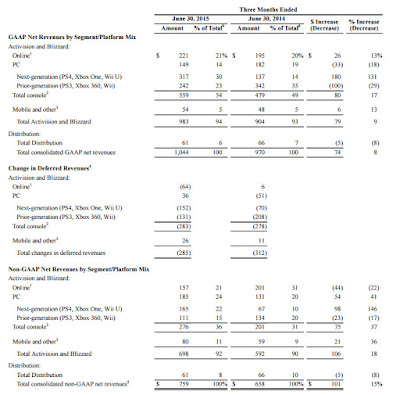 Let me talk for just a minute about the difference between GAAP and Non-GAAP revenue (and for those of you that aren't sure, GAAP stands for Generally Accepted Accounting Principles.  It's basically the set of rules that people have to follow in keeping their books and preparing their financials.

For a subscription type product like Warcraft, on a GAAP basis, you'll spread your revenue over the life of the subscription and recognize it when actually used.  For people that are just paying monthly, it doesn't make a difference, but for people paying 6 months or a year at a time, or for token sales, those transactions get deferred and don't get recognized until actually used.

So as you can see from the chart above, GAAP revenues were up 13% over prior year for Warcraft, which is good, but non-GAAP revenues, which really just reflects current orders and purchases, were down by 22%.  What you are likely seeing there is the impact of token sales in prior periods being recorded as the monthly subscriptions represented by those tokens are used.

They don't break out details on their balance sheet by segment or by platform, so there is no way to tell what the deferred revenue balances for Warcraft were as of the end of this quarter compared to the same quarter in the prior year.

So here is another interesting chart: 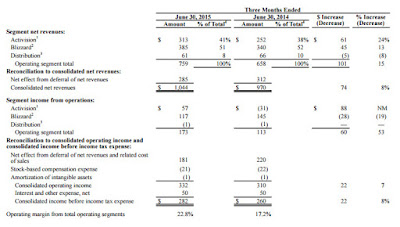 One thing that I want to point out is that this chart is in the opposite order from the first one.  So when it says "segment net revenues" on here, that's on a non-GAAP basis.  The interesting thing here is that while non-GAAP revenue for Warcraft was down, non-GAAP revenue for Blizzard overall was up 13%, which really points to a lot of strength in their upfront "orders" in their other product lines.   However, the income from operations for Blizzard was actually down 19% despite that increase in revenue.

So after the official press release, the next item up was the actual earnings call.  For those of you that may not be familiar with these, typically the company will go through a series of slides and prepared remarks (the slides are available on their website if you'd like to see them).  They'll then spend 15-30 minutes taking live questions from key analysts and institutional investors.

Most of what they said in the prepared remarks related to Warcraft were just a rehash of what was in the press release, focusing on Hellfire Citadel being one of the largest non-expansion content patches ever.  They mentioned the upcoming mini patch to bring flying to Draenor and also mentioned changes in that patch to PvP matchmaking.  Finally, they also addressed Thursday's upcoming announcements at Gamescom.  It was pretty brief, but basically what they said was that they've heard the players feedback from Warlords, and we're going to be very excited by what we hear on Thursday.  A lot more time was spent on the other Blizzard platforms.

In the Q&A, the vast majority of the questions related to other platforms.  Their Merrill Lynch analyst, however, asked them about the outlook for Warcraft given the subscriber loss and asked if they could provide some breakout of the subscriber decline by geography (which isn't something they disclose, so they politely declined).  Addressing the subscriber loss, Mike Morhaime had some really interesting to things to say about how they plan to address it.  He said, "Great content is what draws players in, keeps them engaged and brings them back."  He mentioned that there were more developers working on World of Warcraft than ever before and also mentioned plans around faster content releases.  Finally, he also said specifically that they view the movie as a "key inflection point."  He sounded very confident that their plans around new content would lead to a subscriber rebound.

Of course, they also thought Twitter integration and some new Harrison Jones quests qualified as a "content patch" so it's possible that interpretations vary of what qualifies as content.  (Sorry, so much text without any typical Joar snark...I just couldn't resist).

So overall, all of this still fits with the view that I've laid out previously of them treating Warcraft as a cash cow.  They're investing in it because they want to maintain that cash flow, and a steady subscriber base is key to that, but it's not a growth engine for them anymore.  There is definitely a lot more interest and attention going to the other platforms at the moment.  It will definitely be interesting to see if the "inflection point" created by the movie might change that.