Catching Up Professions in Legion

So better late than never, right.  I finally decided that I should probably finish up maxing all the professions before the next expansion hits.  Just always something I've done, really since Cataclysm.  But with Legion, I haven't really been feeling the profession game as much, so it isn't something I've been bothering with.

Going into this little project, I only had a handful done.  Most of the professions on my main - Tailoring, Enchanting, Fishing and Archeology (courtesy of the moose) were all done.  I also managed to get Herbalism on my Hunter, and Skinning on my Druid, then knocked out both Leatherworking and Blacksmithing a couple of months ago (if you're doing the quest chains on those, they end up being pretty easy to finish)

The first step in all of these has been to hit the Darkmoon Faire each month for that easy 5 points.

Jewelcrafting has really just been a matter of keeping an eye out for the world quests in order to get a few recipes to three stars.  Once those were done, getting it at least to 790 was pretty simple.  Particularly since I've had my paladin rolling world quests with the gem finder shoulder enchant, which has kept him reasonably stocked.

Inscription required getting some Darkmoon Faire tickets and buying up to the three star recipe for the Prophecy Tarot.  Once that was had, it seemed like mass milling Dreamleaf was by far the best bet for knocking out the needed Sallow Pigment.  From there, getting to 800 was easy.  Excess Bloods were used to obtain the Dreamleaf.

On Engineering, this one has been one of the biggest pains because it has required farming up Sightless Eyes in the Dalaran Sewers.  Or in my case, Fishing up Sightless Eyes.  It took a couple of hours, but with a level 3 recipe for Gunpower Charge in hand, after that the process was expensive but quick.

Alchemy has required some questing and dungeons to get the various flask recipes and the Argus recipes have also been helpful.  My Hunter alchemist has the Harvester enchant on his shoulders, so he's been stocking up on herbs while doing world quests, making it fairly easy.

Mining has probably been one of the biggest pains in the butt.  Once you hit a certain level, it seems the only way to get additional skill points is by completing one particular world quest whenever it's up - the stupid giant infernal thing.  That, and Darkmoon Faire each month.  This one seems to have been really poorly thought out.  It's possible that if I was doing more actual mining and gotten some of those to 3 stars, I'd be getting more skill ups from actual mining, but we're trying to be quick about this.

Cooking basically has involved buying a recipe involving Falcosaur Eggs from the Wardens and then either buying those on the auction house or farming them.  Also a pain.  I'd gotten at least part way on the nonsense with Nomi, but I gave that crap up a long time ago.

Finally, First Aid - doing the quests whenever they pop up is probably the easiest way to knock this one out, but of course I haven't been doing that.  If you want a quick catch up approach, there's a Loofa thing you can buy from Wardens that you can make with Falcosaur feathers that will get you to about 760.  From there, you can get a recipe from your trainer for a splint that will get you to about 790 or 795.  From there, either the quests or the Darkmoon Faire will get you the rest of the way.

So that's my quick guide to profession catch ups!

In other updates, toon #29 and #30 made there way to 110.  Toon #30 was a boost from level 60, so it doesn't entirely count.  It did remind me though that if you're going to be boosting a toon from 60, be sure to send anything you've accumulated to your auction house toon before kicking off the boost, because everything in your bags disappears in the process.

Oh, and after finally accumulating 150 Curious Coins, Joar is now the proud owner of: 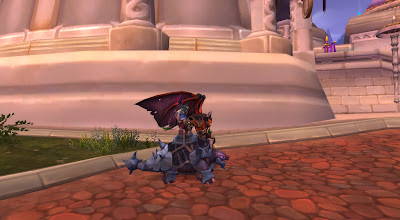