So I managed to hit 110 on the first of my allied race toons yesterday.

Blizzard hasn't done a particularly good job of explaining how to complete the quest that pops up to obtain the Heritage Armor set.  There's really no clue given as to how to get to the place that it instructs you to go, and if you try to get there the "normal" way, which requires a fair amount of effort, the NPC that you need isn't there.

So that was a bit frustrating, but a quick bit of research on Wowhead quickly showed the way.  But that really shouldn't be necessary.

In any case, I look cool. 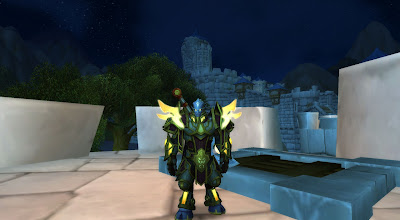 Planning to work on the other three allied races next, but haven't decided if I want to push them one at a time, or do them a bit together.

The 9 year anniversary of starting this blog is this Saturday.  Of course, I'll be at a swim meet all weekend with the Joarlings, so not able to actually post something then.  So I'm doing it now, while maintenance is ongoing.

It was almost 2 years before I actually hit that goal.  I managed to get every class except for warrior to max level before the Wrath of the Lich King ended, but that still left warrior to complete fully through Cataclysm.  So on May 26, 2011, I actually ended up getting there.

Of course, the next idea that occurred to me thereafter was "wouldn't it be cool to have a toon from each class from EACH FACTION?"  Yeah.  That seems brilliant.  I got a little distracted by both Rift and SWTOR in between, so it was almost a year in between before I started working on a few alliance toons before Mist of Pandaria came out.  I only managed to get 2 alliance characters to max level before the release of Mist of Pandaria, which also added a new class, so raised the total required for each faction from 10 to 11.

It was August of 2013 before I managed to get all 11 Horde classes to max level in MOP.  I was also delayed a little bit in MOP with leveling my alliance toons because I thought it would be fun to have all 11 toons kill Garrosh in LFR, which is also something that I accomplished over the course of 2013.

I didn't end up getting there before the end of MOP.  Wildstar provided an additional distraction and I also got into pet battling during this time.

Now Warlords of Draenor.  That was a different story.  Not much distraction during good old WoD.  And a much faster leveling pace!

The first 11 toons went a bit faster in Warlords of Draenor, and I had them all knocked out by July (and that was with grinding out stuff for the legendary ring on 3 different characters).  About 5 years after completing the first goal, I finally got there on the second, having my 23rd max level character, consisting of one of each class of each faction, plus one extra warlock (you can never have too many warlocks) on May 23, 2016.  Almost 5 years to the day after finishing the first 10.

I continued to level through the rest of Draenor and finished that expansion with a total of 26 level 100 toons.

Through Legion, we added one more class, and I've continued to work on the third set, bringing my total as of today to 32 max level toons.  I expect to finish one more well before Battle for Azeroth launches, and I guess we'll wait and see what leveling opportunities are presented by the pre-expansion launch event to see if I can make any progress on the last 3 on the third server.

As you can imagine, with 32 max level toons, there is a decent amount of preparation needed before the new expansion including cleaning out bags, banks and quest logs.  I'll be putting together a separate blog post in late July / early August laying out my pre-expansion preparation process.

Time to Buckle Down

So it looks like the pre-expansion patch is going to be hitting in early July, which means it's time to buckle down and see how many additional toons I can get to 110 before that point, and then maybe see if whatever events go with that provide any benefits that might let me get a few more down the road before BfA launches.

I've been making decent progress on the leveling front and a little bit on the paragon farming front.  I got the Dreamweaver paragon mount since my last update, so that leaves me with just three to go - Valarjar, Farondis and one last Army of the Light.  Of course, with Army of the Light emissaries only coming around every 3 weeks lately, the likelihood of that happening any time soon is really low.

So, I'm not sure the Dreamweaver mount is the most warlocky mount I've ever been on.  Seems like more of a Blood Elf mage mount.  Just sayin'  Would probably look pretty good for a Nightborne priest too now that I look at it.  Not shadow of course. 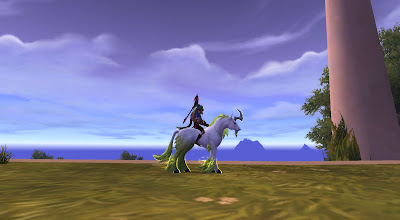 I've been leveling all four of my allied race toons, with 3 of them just making progress until they run out of rested xp, and then going back to working on the main one that I'm focusing on.  I may stop that until the pre-patch comes out and just focus on getting the paladin to 110.  Currently the paladin is sitting at level 81 and working his way through Pandaria and the remaining characters are all sitting around level 35.

Other than cleaning up quest logs and a little bit of bag clean-up, everyone is basically more or less ready to go for Battle for Azeroth anyway.