This has probably always been the case late in an expansion, but it's hard to tell because I've never stopped playing early in an expansion before.  But getting fully caught up in Shadowlands really took very little time.  There is no question that the new zone in Zereth Mortis and the quests associated with it were designed to make that happen very quickly.  With fairly limited play time because of my IRL schedule, I was basically caught up within two weeks, have unlocked flying in both the Shadowlands and Zereth Mortis, and am geared enough that I've run about half of Sepulcher in LFR.

I'm still playing as Destro, because I love the AOE abilities that it offers on the large trash pulls in Sepulcher, although I'm still not fully gear optimized for that.  I've finished the first two wings and also picked up my first tier piece.  I'm still working through the full Zereth Mortis storyline and knocking out the world quests there each day.  Having flying unlocked now will certainly help a lot with that.

Unlocking flying was surprisingly straightforward.  The only challenging part was getting through the 10 rares achievements.  With most folks having flying unlocked now, it required some degree of luck to have rares spawn nearby.  Otherwise, they were generally dead before I was able to get there.  It wasn't impossible, it just took some patience.

The only negative that I've seen so far is that with the newest patches, they seem to have taken an expansion that was already overloaded with too many currencies and game systems and added a few more.  Hopefully, they will learn to dial that back a bit in the next expansion.

After I finish Sepulcher on Joar and the Zereth Mortis storyline, I may go back and finish leveling the two members of the original five that I never finished when Shadowlands was first released - my Death Knight and my Druid.  We'll see if either of those is any easier than it was then.

That's it for now.

Returning to World of Warcraft

After 15 months away, I've been logging in to World of Warcraft a bit lately.  There is actually a surprising amount of content that I have missed including the whole Korthia / Chains of Domination storyline and the new Zereth Mortis storyline.  The catch-up mechanics seem to be pretty good so far.  They've done a nice job of adding clips and little cut scenes to help you better understand how you got to where you are now. 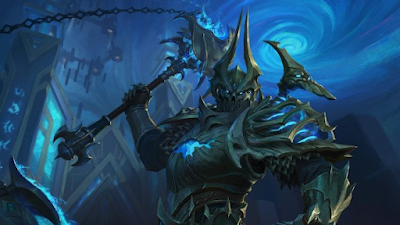 From what I've seen so far, it feels like they're doing a decent job of trying to pull together and wrap up some plot strings that have been dangling out there for the last few expansions now, so hopefully things can start somewhat fresh with the next expansion (although I think we're still ignoring the giant sword sticking out of Silithius)

I've been trying to get into LFR for the raid that I missed, but there don't seem to be many people doing that, so I haven't had any luck so far.  I need to grab a bit more gear from Zereth Mortis world quests in order to be able to run the new LFR raid, but I'd like to see the old ones at some point.

At this point, I'm only playing on my warlock, and have been sticking with Destruction so far.  It feels a bit squishier than I remember, but that may just be that I'm not quite geared enough yet.  I think I'm still outfitted mostly in the blues you needed to get access to Castle Nathria LFR, although I've been steadily upgrading those with rewards you get from the Zereth Mortis quests.  I am going back and running the Korthia campaign quests just to unlock flying, and then I'll look at how to unlock flying in Zereth Mortis.

As mentioned previously, I have gone back and started to work on leveling my Astrologian again.  That job is currently sitting at level 66.  And because I don't really like healing the level 50+ dungeons, I'm simultaneously working Red Mage through the daily leveling roulette.  I really just started that today.

I still have been debating the housing situation, but I think I've decided that I'll be better off just grabbing an apartment somewhere instead.  Particularly given my tendency to spend time away from specific games.

That's the update for now.  I'll try to provide additional feedback on WoW Patch 9.2.5 in next week's update.