Back from Vaca and Back to My Favorite Tree

Well, I was away on vacation with the family for a week with essentially no internet access, so wasn't getting much done on the leveling front. I did manage to get my warrior to level 62 and pretty far through Hellfire Peninsula since my last post. He continues to be an absolute blast to play.

I've also rediscovered my love for my druid. I'm not sure why, but early in Cataclysm, I seem to have totally lost the feel for healing on my druid. For some reason, after a week off, it all seems to make sense again, so I've been doing a little bit more healing on my druid and have knocked out his first few heroics. So, in the interest of getting him a little bit geared, I've started working on Tol Barad, Therazane and Dragonmaw dailies as well.

By the way, for those of you that hate getting mobbed by all those dwarves while you're doing your Dragonmaw dailies, let me pass on a little bit of unfairness that I discovered today. Druids can ignite those Wildhammer kegs and pick up that food, while still in flight form. Oh yeah. Hover overhead, ignite keg, grab bread, fly away, completely oblivious to the chaos around me.

So, leveling the warrior may go on hold for a while so I can work on getting the druid caught up gear-wise to my warlock and my paladin.
at March 29, 2011 No comments:

I hit level 49 on my warrior last night, so down to single digits until Outland. It actually makes me a little sad as I've really enjoyed what Blizzard has done with the old starting zones so far. Every zone I've been in so far has been very engaging and interesting.

I finished up Badlands (the questing line in there involving Black Dragonflight eggs is really fantastic) and have moved on to Searing Gorge. That's the first place that I seem to have found a little bit of repeat from what I remember before, but it's still all pretty well done.

The only downside that I've been able to find from the new smooth questing paths from 1-60 and the fact that Blizzard has removed all the hopping back and forth between continents is that getting training for new spells and abilities has become a bit more challenging as there is really no reason whatsoever to go back to a capital city other than that. So it's no longer just a matter of "I'll swing by and grab that on my next zeppelin trip" because there isn't going to be a next zeppelin trip.

So, that's been a bit of a struggle, but not a big deal overall.

My guild is basically one day away from hitting level 20, which will open up the BoA head pieces, which should accelerate my leveling even further. Right now I'm at 1 day, 2 hours played time to level 49, which seems absolutely lightning fast to me. I know Joana's old record for 1-60 was 4 days, 20 hours which was absolultely breathtaking speed at the time. And it looks like I'm going to completely blow that away. Of course, Joana wasn't working with 35% BoA xp bonuses and a 10% guild xp bonus, so that makes a big difference. However, even if you adjust for that 45% boost, it should still come out to somewhere around 2 days, 16 hours to 60, and it at least looks like I'm going to be faster than that.

The difference would at least seem to be driven by the improvements that Blizzard has made to the questing experience.
at March 15, 2011 No comments:

I've been splitting time these days working on various dailies mostly on my paladin, and then working on leveling my warrior. I've been really pleasantly surprised by how much I've been enjoying leveling the warrior. Now I will admit, it may have something to do with the fact that he's totally tricked out in full BoA's which means he's wreaking total havoc with everything that gets in his way, but it's still tremendous fun.

I'm leveling as Arms - mostly because I already had a good two-hander BoA sword. It seems to be a pretty vicious spec though - the combination of Victory Rush and Mortal Strike seems to put most things pretty quickly on the ground.

I've been able to get him to level 40 pretty quickly. I've been enjoying all of the new quests. While I started him as a goblin, I've actually been leveling over in Eastern Kingdoms just because I really wanted to see all the new quests in Silverpine, Plaguelands, etc. It has definitely not disappointed!

I was intending do try tanking in some dungeons, but I've been enjoying the new quests so much, I haven't really felt the need to bother. That might change once I hit Outland in a few more levels and get back to the same old same old.
at March 10, 2011 No comments: 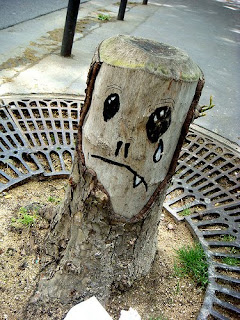 I guess my druid will be staying on the bench while my pally continues to get all the attention for healing heroics and such.

Even my priest is getting more love these days.
at March 01, 2011 No comments: