So in answering the "what next" question that I raised last time, I elected to go down the rabbit hole of gearing up my various alts, mostly using just world quests and emissary quests.

The goals was to get everyone to an average ilvl of at least 385.  Now, I was able to cheat that quite a bit right off the bat as I had more than enough Nazjatar tokens to get everyone full 385's except for rings, trinkets and weapons.  So it's mostly been a matter of watching world quests for those.

When I started a few weeks ago, the average ilvl of all 41 toons was 349.75.  Now it's 370, so I've made pretty decent progress.  There are twelve that are above the 385 mark.  I feel like I may need to run a bunch through the Nazjatar intro questline in order to get their Heart of Azeroth leveled up to a reasonable level though, and that may obviously take quite a bit of time, since I've only done that on 6 characters so far.

Beyond that, I've mostly been keeping up with Assaults and new LFR wings on my main.  So far, I've been enjoying things.  I've done wing 2 twice now and not sure I'll be doing it again.  Just way too long.

Lastly, I finally finished the goblin heritage armor questline.  This one was a major pain in the neck on a warrior, but after gearing him up a bit, and a few lucky pulls, I was able to get it knocked out. 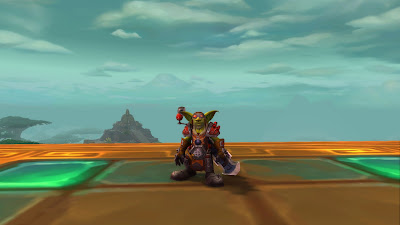 Isn't he cute?  That's Joarmama, the Goblin Warrior.  And yes, I know I need a better transmog for the weapon.

Once I hit everyone's gearing targets, I may go ahead and work on professions, but not sure I see the point in that.  Something to do I guess.

I'm running out of things to do.

That's the realization that I've come to.  I've run three characters through the 8.3 intro quest line, and I was doing the assaults on all three of them, but there doesn't really seem to be that much point to it.

I'll keep doing all of that on Joar and working on reputation for the two factions, but it's not interesting enough to keep me doing it across multiple characters.

I changed in a bunch of my Nazjatar manapearls and now all 41 max levels toons are sitting in full 385 gear.  It kind of stinks that there is no catch up mechanism for rings, trinkets and weapons.  They're easy enough to get via world quests, but I'm not sure I want to bother across all of those toons.

So I've hit a decision point  - what next?

Option 1 is going back to Classic, which I frankly haven't been enjoying that much.  My warlock there is sitting around level 35, so it theoretically shouldn't take a ton of time to finish him up the rest of the way.

Option 2 would be to start a second account, and start leveling a bunch more toons on retail.  Maybe see how quickly I could level and accumulate a decent amount of gold on a completely fresh account.

Option 3 is just to find stuff to stay engaged with on retail.  Focus more on gold making, finish up the professions on my primary server, gear up all of those other toons.

I'm not sure what the answer to the "what next?" question is at this point, but I'm pretty disappointed with where 8.3 has me sitting at this point.  Perhaps the massive leveling push during the anniversary event was a mistake.