Horde Side Reps Are Done, and a Change in Leveling Plans

So I'm fairly close to finishing toon #8.  Courtesy of the anniversary token, the mage has been going extremely quicly.  He's sitting at level 118 and should be done today or tomorrow, depending on how much time I spend on the world boss and on the post-Warfront quests and rares today.

Now that we're 14 years in, that anniversary token is a huge boon to leveling and rep grinding.

I also managed to get all of the reputations to exalted on Horde side earlier this week. 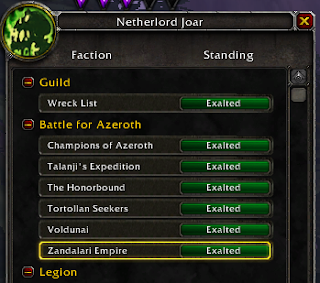 I'm getting pretty close on the alliance side as well, so hoping to knock that out before the next patch hits in a couple of weeks.

I've been thinking about switching up my leveling approach.  With only 3 zones to work through, things are already getting a bit old on the Horde side, and I'm only 7 toons in.  So I may start alternating leveling my Horde toons and alliance toons.

I only saw a small part of the storyline in Tirisgarde and Stormsong on the alliance side when I did the one toon there, so was thinking it would be fun to do more thorough play throughs in those zones.

I also saw that Warsong Battalion had returned to Emerald Dream, but on the alliance side, so it might be fun to turn on War Mode and do some World PvP for a bit as well.

That's it for now!

I finished leveling my demon hunter earlier today.  This one was the fastest one yet.  I think part of what drove that was the use of the anniversary xp bonus through a large part of the leveling process.  I was also basically just questing straight through zones rather than bouncing around.

Total time was just slightly over 13 hours, so that still seems to be the consistent standard for a straight leveling approach.

I'm now at the point where I'm not really trying to gear these guys after I get them to 120.  The world quest slog is just too frustrating, and I'm not really looking to have that many characters to run through the Warfront anyway.

So I'll just wait for the eventual BOA catch up mechanism to hit to gear the rest of these guys up.

I'm either doing the monk or the mage next - haven't quite decided.