I'm down to only having 5 jobs left to move up to level 50 - Paladin, Monk, Dragoon, Dark Knight and Blue Mage.  Then it will just be the slow one at a time grind that I talked about last week. 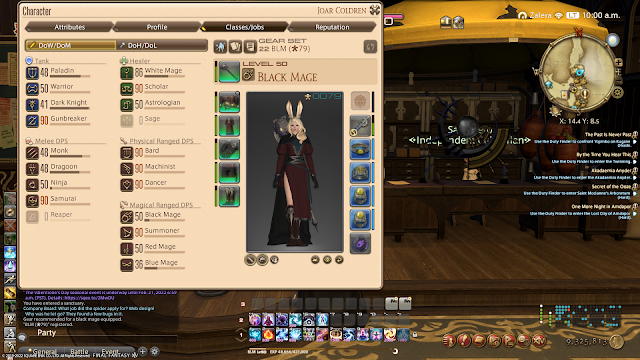 Things have been a bit busy in real life, so I've had pretty limited time for gaming, so it may be a while still before I get very far on this.  I just need to grind out those last 14 levels on Blue Mage, which really doesn't take all that long, but just need to dedicate a couple of hours to it.

As you can see from the above, I'm also pretty far along on White Mage at this point.  And after that, I'll just be following the leveling order that I set out last week.

On the Guild Wars 2 front, I've still been working my way through the Living World Season 3 story.  I'm about half way through at this point, and will be starting Path of Fire after that.  I already did the first part of Path of Fire to get the mount, so I've got a tiny bit of a head start on that one at least.

I managed to get my Bard to level 90 this week, and I'm now working on the White Mage, who is the last of my pre-Endwalker level 80's to be leveled to 90.  I've also been making good progress on all of the other classes, which are all rapidly approach level 50 - most of them are around either level 47 or 48, except for my Dark Knight, which is 41, and my Blue Mage, which is level 35.

I also managed to completely finish getting all of the Asphodelos gear on my Summoner, including the Radiant weapon, having accumulated 7 weapon tokens.  So I think I'm now done with this raid tier for now.

The caster set, which is on the far right in the picture below, looks a little odd on a male Hyur.  In addition to the shoulders, it's also backless.  The Eden healer stuff was the same way, but I always end up coming away feeling like I'm auditioning for the next season of Drag Race. 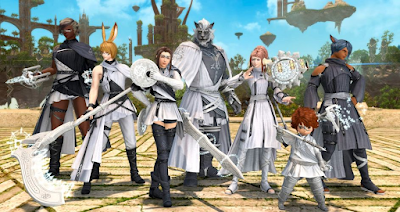 Once the White Mage is done and everyone else is sitting at 50, I'm going to go back to leveling my alt jobs one at a time, so I've been debating the leveling order for the remaining classes.  Here is what I initially came up with:

Except for the last four spots, I think that gives me a good balance of types.  I may tweak this a little bit as we go, but for now that's the plan.

I also finally broke down and bought an apartment room in my Free Company house and spent a little bit of gil furnishing it nicely.  With that in place, I'm not entirely sure I need a house once the new area comes open, but I guess we'll see when that happens.

In Guild Wars 2, I've been working my way through Living World Season 3, which I've been enjoying so far.  There's no way I'm catching up on content before the next expansion comes out, but I'm not in a huge hurry for that anyway.  I'm still not sure that Necromancer is long-term the class that I want to be playing, but at least for now, I'm sticking with that, and haven't picked up my Ranger again.

That's it for now.