One of the interesting things that you might not be aware of as a new player to FFXIV is that there is an incredibly large amount of content that is not automatically unlocked as a result of leveling and progressing through the MSQ.  This content includes Trials, Dungeons, Alliance Raids and Normal Raids.  Almost all of these items include interesting quest lines and stories associated with the content being unlocked.

This can also include both Hard, Extreme and Savage modes of different types of content.

Beast tribes are another type of content that can also be unlocked, none of which are started through the MSQ.  Beast tribes unlock daily quest type content and also various rewards that become available at certain reputation levels.  I'll cover beast tribes in more detail in a later blog post. 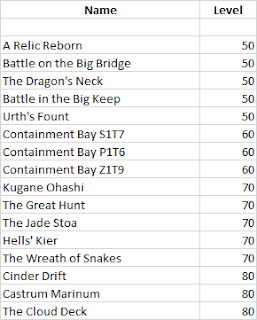 A couple of notes on these lists.  I've left the high-end extreme and unreal versions of the trials off these lists.  These are sort of the FFXIV equivalent of mythic raiding for you WoW folks.  Also, the first trial on here, Relic Reborn, is part of a fairly lengthy quest chain to get your relic weapon for ARR.  The weapon itself isn't particularly useful these days, but could be something that you want for a glamour.

In order to unlock each of these, if you go to the website that I linked above, it'll also include the unlock quest, which you can click on to find out where the quest giver is.  Note that a few of these are part of a larger quest chain, so if there is a previous quest listed, you may need to go back a bit to find the actual starting point.

In other FFXIV updates, I've managed to get my Machinist to level 65 in the limited play time that I've had the last several weeks.  I've also been running Eden's Promise on my Summoner to try to get 510 gear for my Samurai in the thought that I might go Samurai main for Endwalker.  I haven't been having a ton of success with that, so I may just buy the gear I need at some point.

I've also been doing a little bit on both the White Mage and the Thaumaturge.  Can't decide which of those two will be the next job that I level, but I'm keeping them both somewhat in motion just in case.

I've probably been playing too much FFXIV lately.  I've been working on leveling my SAM job, which is currently sitting at level 78.  I've also been working on White Mage (48) and Machinist (57) during downtime from roulettes with SAM.  Finally, I also started an Archer / Bard and a THM/BLM.

I also did my first dungeon run on my Gladiator / Paladin which went okay.  I was kind of surprised how long the dungeon queues for tanks were.

I think I'm starting to figure out that I don't really enjoy playing a healer or tank in this game all that much, with Scholar being the one exception to that.  So I may just focus on working on all the various DPS specs for now.  Maybe continue to work on WHM and PLD when I feel the need to revisit.

I also did all the new MSQ stuff from 5.55, which I enjoyed.  I was surprised there wasn't a new dungeon in 5.55, but that's fine.  I'm also going back and working on some of the Resistance Weapon stuff as well as the whole Bozjan quest line, which has been pretty interesting.

ESO has been getting pretty heavily ignored over the last few weeks while I was very focused on my SAM in FFXIV and also just generally busy irl.  I even missed the launch day of Blackwood.  I did hop into it yesterday and started working my way through the main quest story line.

I also created a Stamina Nightblade character which is what I may work on next.  Was thinking about trying to just level him through dungeons and also maybe do some of the Thieves guild and Dark Brotherhood content on him, since neither of those seem to fit with a Magicka Templar and its super bright glowiness.

That's about it for now.