So the class mounts are done.  Or at least most of them are.  Because warrior is my least favorite character (no judgment at all to those of you that love warrior - it's just never been a class that I've gotten the feel for), I can not for the life of me get through the Trial of Rage scenario to get the class mount.  That first guy with his Rampage and his totems gets me every time.

But that's okay.  I got the other 11.  And I'll come back and try again every now and then.  Eventually, I'll outgear the thing and it'll be mine.

So I've unlocked Concordance on the warlock and the hunter and running them through Tomb as it opens, so for now, I'm back to leveling.

I'm working on the alliance death knight at the moment.  I'm leveling him as unholy, which hasn't been my 100% favorite so far, but I'm sticking with it.

He's sitting at level 105 and working his way through Highmountain.  I want to try to get in some of Stormheim on him as well because I totally forgot to do that zone on the warlock, and I believe that's the only zone where the alliance content differs a little bit from the Horde.

Up next will be the alliance hunter, who I plan to level as survival, because I've not played that spec at all yet.

So the edge of your seat, riveting story line that was the Broken Shore campaign (/sarcasm) is now complete, and class mounts are now available all around.

I managed to get three right away as I'd been working all three toons through the steps of Breaching the Tomb. 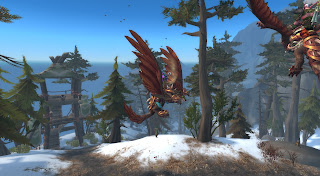 While Blizzard appears to have outsourced the development of the Broken Shore story line to a Roomba with a pen taped to it, they've done a much better job with the quests for each class to obtain the actual mount.  I won't include any actual spoilers here, but at this point, I've done hunter, warlock and death knight and so far the hunter is my favorite.

The warlock one was a much bigger pain in the ass, so I'm not sure why there is such disparity in level of effort to obtain each mount. 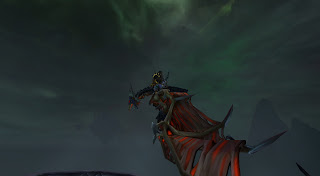 So now I've decided I need them all, so I'm working all my Horde toons through the process of completing the aforementioned fabulous Broken Shore quest chain.

At this point, the remaining 9 toons are all through the Marks of Sentinax stage and 8 of the 9 are working on the 12 world quest portion.

My demon hunter is just waiting for the servers to come up today so he can collect his completed mission for the last part and then run off to do the demon hunter quest.

I think the ones that I'm least interested in are probably paladin and mage, so those are the last two that I'm running through.  Shaman is up next after the demon hunter.  As much as I've hated that character this expansion, the shaman class mount is really unique and I must have!

So that's it for this week.  Once all of those are done, we'll be running Joar and / or my hunter through Tomb once it opens, and then we'll probably go back to leveling the alliance portion of the empire.

The First Alliance Toon of the Expansion is Done

I managed to finally hit 110 on my first alliance toon of the expansion, so yeah, go me.  The death knight is up next, but now seeing that heirlooms will be scaling to 110 starting with the next patch, I will probably just wait at this point.

In the meantime, I'm working on getting to the Concordance trait on 2 or 3 toons as well as finishing up the Broken Shore quest line on 2 or 3 toons as well.  This is proving to be a bit of a challenge on my death knight, because I hadn't actually done anything to gear up his various followers, so he doesn't actually have any Broken Shore Order Hall Missions available.

So we're gearing up a follower or two and we'll see if that shakes a mission loose to complete.

Finally, I've been doing some healing in Nighthold LFR on both the paladin and the druid, just to give it a try.  I've been a little sad to discover that Vuh'do appears to be too glitchy for me to use.  Not sure if it's how it interacts with other addons that I use, but the frames seem to change around mid-raid, making it impossible to use.  I've never been a big HealBot fan, so I'm going to give Grid and Clique a try.

I also thought this was a good opportunity to try my shaman as resto since I haven't been a big fan of elemental this expansion, so I went through and grabbed the artifact weapon for resto.  So I might give him a dash through Nighthold once the servers come back up later today just to see how that feels.

I've also never done healing on the monk and I may give that a try just to see.

Not sure if we'll be able start actively working on class mounts this week or not, but if so, that'll be a definite focus.