So I'm mostly back to leveling.  I gave up on the Unshackled Paragon mount after 7 unsuccessful attempts.  I'm splitting time between classic and retail, because I feel like I'm going to run out of toons on the retail side long before the new expansion comes out.  Unless there's some kind of grindy obnoxious new content as part of the new patch.

I managed to hit level 120 on my first character on my third server today.  Destruction warlock.  It's probably my least favorite warlock spec to level this expansion, but even with that, it was still totally fine.  I've got a survival hunter that I'm leveling with a friend that's about halfway through, sitting at level 115.  I've also started my third demon hunter through the process, but he's still fairly early on.

I may shift back to alliance for the fourth toon on this server and do another frost DK.

Happened upon the mysterious flying fish of Zuldazar today while finishing up the warlock. 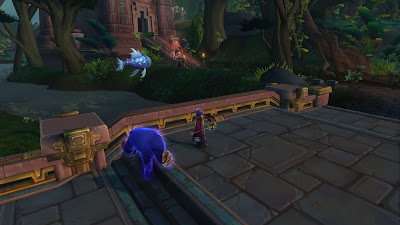 All of it's buddies were clearly down below in the river, so I sort of felt bad for this guy.  Must be kind of lonely just hanging out there in mid air.

I'm very close to being done with leveling a toon of each class on the alliance side as well.  Character number 24 is sitting at level 118, definitely in the home stretch.  I'm using the same approach with this one that I did with my Horde shaman, taking the Azerite gear for Head, Shoulders and Chest instead of using heirlooms in those spots.

I'm not sure if it's improving the leveling speed in the slightest (for the shaman, it felt like it didn't), but the extra survivability definitely makes me enjoy the process more, so I'll sacrifice the time.

It's been a while since my last update, but I did manage to get three more characters to max level.  Enhancement shaman, Dear God Whatever Will Keep Me Alive Rogue (had issues picking a spec there if you can't) and A Little Bit Of Everything Mage.  As I mentioned earlier, the mage I leveled with a friend.  There was a lot of time waiting as a result, so the leveling time there wasn't great.  Frankly, the leveling time for two of the three wasn't great:

The priest has felt pretty good through the leveling process, so I'll be interested to see what his numbers end up at.

Also, I've still been grinding out Unshackled rep for Paragon chests in the hopes of getting the mount to drop.  I'm 0/4 so far, and slightly more than half way to number 5.  It's getting a bit frustrating, but I'm planning to continue with it for now.

I also did the stuff needed to unlock the rep grind for the bee mount, although I likely won't take that on until I get the Unshackled mount.

After the priest, it'll be on to my third server, where as usual, I'll be starting with a warlock.  This one will be leveled as Destruction, just because I haven't done that yet.  After that, it'll be a survival hunter.