Level 120 #3 Done and the Warfront Shuffle

I managed to hit 120 on my third toon last Friday morning.  During Legion, it was mid-October before I had my third toon to max level, so this is pretty on pace with that.  This one came in more than 6 1/2 hours faster than the previous Horde toon, so that's probably a good approximation for the time savings if you don't putter around and read all the quest text, etc.

So now I'm working on running all three toons through the daily emissaries.  I want to see the full War Campaign on the alliance toon, and my plan is always to run the emissaries on somewhere around 5 Horde toons.

So far, gearing up via world quests has been working out just fine.  I managed to get world quests weapon rewards on both hunters, and I've had pretty decent lucks with World Bosses.

I probably shouldn't have used the phrase Warfront Shuffle in the title of this post, because it probably gives the impression I'm talking about some kind of gold-making plan.  I'm just referring to the weird weekly back and forth cycle of the Warfront and the different types of awards available at each stage.

I've found the world bosses to be pretty rewarding and a few of the quests to be definitely worth running.  By the time my main got around to doing Warfronts, the gear upgrades from every run weren't necessarily worth doing it too many times.  I think that math may work differently for my alliance hunter once the cycle comes back around.

The regular quest to kill 20X mobs that rewards an equipment cache has also been really worthwhile.

I haven't gotten anything interesting off any of the rares at this point, but I haven't really done any aggressive farming of them either.

Up next in the leveling cycle is my death knight.  I'm going to at least start trying to level him as frost, but I usually end up switching to blood at some point.  We'll see if I can hold out as frost the whole way this time.

I managed to finish getting my alliance hunter to max level yesterday.  His total played time was 18 hours, which was about 2 1/2 hours faster than my warlock.  Because the alliance zones were all new to me, I was still basically reading all the quest text, so I was surprised it was that much faster.

I played Beast Mastery the entire way.  Interestingly enough, even though it appears to be one of the strongest specs at end game right now, it didn't feel as strong to me while leveling as Marksmanship does.

The other thing that I realized as I've been working Joar through the various end game content is that I'm really going to want to see the War Campaign alliance side as well, which means I'll be doing the WQ rep grind on this alliance toon as well.  Not really what I planned, but I suppose that's fine.  I'm guessing I'll be mostly through it before I get to that point with the fifth Horde toon anyway.

My Horde hunter is sitting at level 118 and working his way through Nazmir.  That's an interesting zone for me this expansion because it combines some of my favorite questlines with some of my least favorite of the expansion.

One thing that has also become clear is that once the eventual leveling nerfs hit later on, it will very likely be possible to go completely from 110-120 entirely in a single zone.  For me, that will be AWESOME!  because it means I'll be able to rotate the crew among 6 different leveling plans.

Also tried the Warfront on Joar.  It's a fun and interesting thing.  I'm looking forward trying it on the alliance side as soon as the Horde loses it again.  It's at least a good way to get a few decent gear upgrades for new 120's which will be a nice way to get them started and make world quests a little bit easier.

So the plan till this time next week is keep working through emissaries and stuff on the two max level toons, give the first wing of LFR a try and continue to leverage Warfronts as they're live for gear upgrades on new max level toons.  We'll try to get the Horde hunter to 120 and get him in the WQ groove and then start on leveling the death knight.

Still not sure if the plan is going to be Frost or Blood for the DK, but we'll have to see what Frost's survivability feels like.

I'm now most of the way through two zones as Alliance, having finished Drustvar and being through all but one main storyline segment of Tirisgarde.  Like the Horde-side, I find the alliance zones to be really well done from a content and story-line standpoint.  The entire zone seems to hold together very well in a single coherent narrative that works really well.   I feel like there are a LOT more side quests on the alliance side than there are Horde side, but that is probably just a matter of perception and not actual reality.

My alliance hunter is sitting at 117 and my Horde hunter is at 113.  It'll probably be next week before I finish them both up.

Gearing up and running world quests and emissaries continues to go well for Joar.  I'm not Revered with anyone yet, but there's not really a hurry.  I unlocked another section of the War Campaign that I really enjoyed the story on.  For this particular section, it actually really helped if you had read Christie Golden's book, Before the Storm.  I really don't want to put the work in, but I feel like I should probably run the War Campaign on at least one character alliance side as well.

I've been doing Island Expeditions to try to unlock the next piece of War Campaign research.  I'm looking forward to all of the Arathi Highland stuff unlocking for Horde next week.  Made a bit more progress on the profession front as well.

Beyond all of that, it's been mostly hanging out at the cash register at the Krusty Krab. 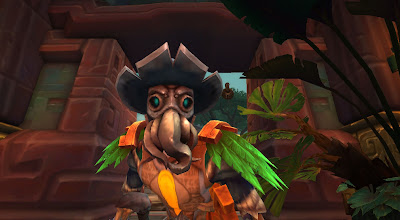 Yes, I'm wearing a Loremaster tabard.  Don't judge me.  I worked a long time for that.