Big Progress on Crafting and Gathering and More Jobs to 90

The big news since my last blog post update is that I've gotten quite a few of the DOH/DOL jobs to 90 at this point, most within the last day or two.  Mining is done on the DOL side, and Leatherworking, Blacksmithing, Armorer and Goldsmithing are all done on the DOH side.  Most of the rest are somewhere around 89, so the rest should be done fairly soon.

I did end up making a full set of level 87 crafting gear, just to make finish all that up a little bit easier.  Thought it looked pretty good: 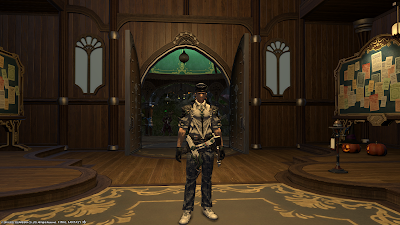 Once all of the DOH/DOL jobs are done, I'm going to start working through all of the ilvl 560 crafting and gathering gear, so I'm not in the same spot for the next expansion that I was for this one.  All of that is obviously absolutely no rush at all, so I will likely just work on single pieces here and there as I have time.

I've also continued to make progress on leveling my other jobs.  I finished getting both Gunbreaker and Samurai to 90 and am now working on leveling Dancer, which is sitting at level 82.  After that, it will likely be Bard and then White Mage, and that will finish up the jobs I had previously gotten to 80.  My Astrologian is sitting at level 50, so that will be the one to go after White Mage.  I also finished the Tank role quest, leaving only the melee dps role quest to complete, which I've already started on.

I've also made good progress on working the other various jobs towards 50.  Most are sitting around level 44.  I did realize that I had never started a Dark Knight, so I went back and rectified that, and have gotten that job to level 35.  I am just working Dark Knight through dungeons trying to catch that job up with the rest of the sub-50 jobs.

Finally, I've been trying to do Pandaemonium every week and am only still missing two pieces of gear from that raid - gloves and boots.

Till next time.  Cheers,